Our senses suggest to us that Earth is the center of the universe—the hub around which the heavens turn. This geocentric (Earth-centered) view was what almost everyone believed until the European Renaissance. After all, it is simple, logical, and seemingly self-evident. Furthermore, the geocentric perspective reinforced those philosophical and religious systems that taught the unique role of human beings as the central focus of the cosmos. However, the geocentric view happens to be wrong. One of the great themes of our intellectual history is the overthrow of the geocentric perspective. Let us, therefore, take a look at the steps by which we reevaluated the place of our world in the cosmic order. 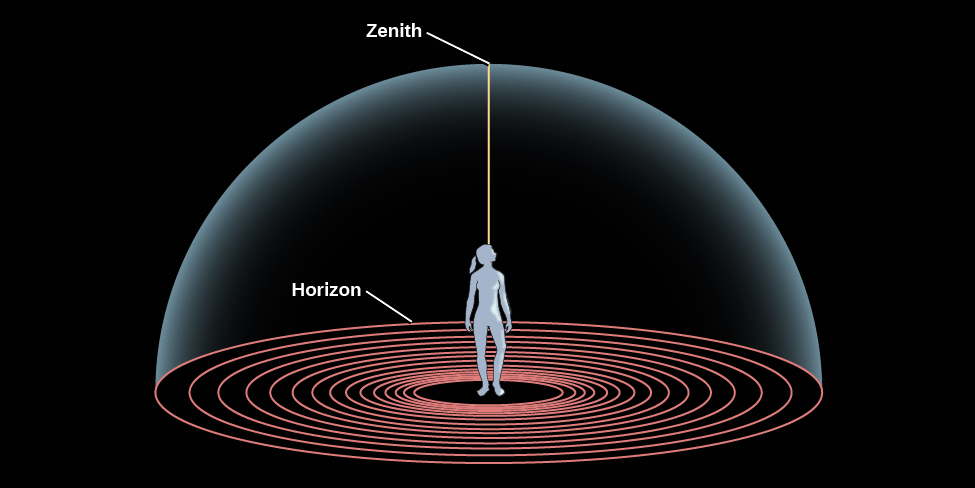 Figure 2.2 The Sky around Us. The horizon is where the sky meets the ground; an observer’s zenith is the point directly overhead.

The Celestial Sphere
If you go on a camping trip or live far from city lights, your view of the sky on a clear night is pretty much identical to that seen by people all over the world before the invention of the telescope. Gazing up, you get the impression that the sky is a great hollow dome with you at the center (Figure 2.2), and all the stars are an equal distance from you on the surface of the dome. The top of that dome, the point directly above your head, is called the zenith, and where the dome meets Earth is called the horizon. From the sea or a flat prairie, it is easy to see the horizon as a circle around you, but from most places where people live today, the horizon is at least partially hidden by mountains, trees, buildings, or smog.

If you lie back in an open field and observe the night sky for hours, as ancient shepherds and travelers regularly did, you will see stars rising on the eastern horizon (just as the Sun and Moon do), moving across the dome of the sky in the course of the night, and setting on the western horizon. Watching the sky turn like this night after night, you might eventually get the idea that the dome of the sky is really part of a great sphere that is turning around you, bringing different stars into view as it turns. The early Greeks regarded the sky as just such a celestial sphere (Figure 2.3). Some thought of it as an actual sphere of transparent crystalline material, with the stars embedded in it like tiny jewels. 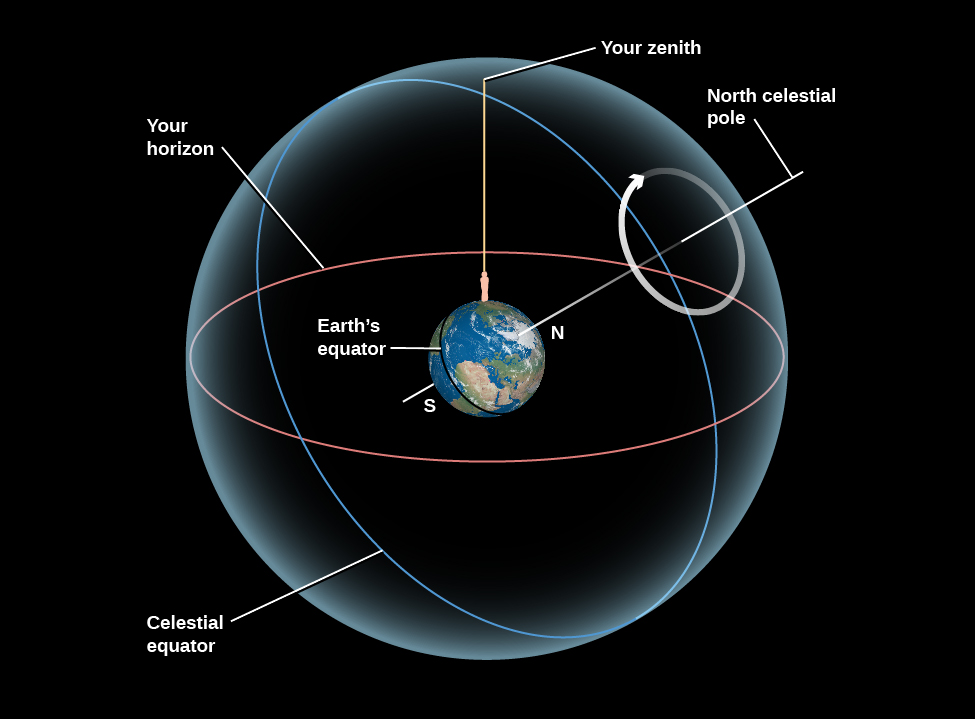 Figure 2.3 Circles on the Celestial Sphere. Here we show the (imaginary) celestial sphere around Earth, on which objects are fixed, and which rotates around Earth on an axis. In reality, it is Earth that turns around this axis, creating the illusion that the sky revolves around us.

Today, we know that it is not the celestial sphere that turns as night and day proceed, but rather the planet on which we live. We can put an imaginary stick through Earth’s North and South Poles, representing our planet’s axis. It is because Earth turns on this axis every 24 hours that we see the Sun, Moon, and stars rise and set with clockwork regularity. Today, we know that these celestial objects are not really on a dome, but at greatly varying distances from us in space. Nevertheless, it is sometimes still convenient to talk about the celestial dome or sphere to help us keep track of objects in the sky. There is even a special theater, called a planetarium, in which we project a simulation of the stars and planets onto a white dome.

As the celestial sphere rotates, the objects on it maintain their positions with respect to one another. A grouping of stars such as the Big Dipper has the same shape during the course of the night, although it turns with the sky. During a single night, even objects we know to have significant motions of their own, such as the nearby planets, seem fixed relative to the stars. Only meteors—brief “shooting stars” that flash into view for just a few seconds—move appreciably with respect to other objects on the celestial sphere. (This is because they are not stars at all. Rather, they are small pieces of cosmic dust, burning up as they hit Earth’s atmosphere.) We can use the fact that the entire celestial sphere seems to turn together to help us set up systems for keeping track of what things are visible in the sky and where they happen to be at a given time.

Celestial Poles and Celestial Equator
To help orient us in the turning sky, astronomers use a system that extends Earth’s axis points into the sky. Imagine a line going through Earth, connecting the North and South Poles. This is Earth’s axis, and Earth rotates about this line. If we extend this imaginary line outward from Earth, the points where this line intersects the celestial sphere are called the north celestial pole and the south celestial pole. As Earth rotates about its axis, the sky appears to turn in the opposite direction around those celestial poles (Figure 2.4). We also (in our imagination) throw Earth’s equator onto the sky and call this the celestial equator. It lies halfway between the celestial poles, just as Earth’s equator lies halfway between our planet’s poles. 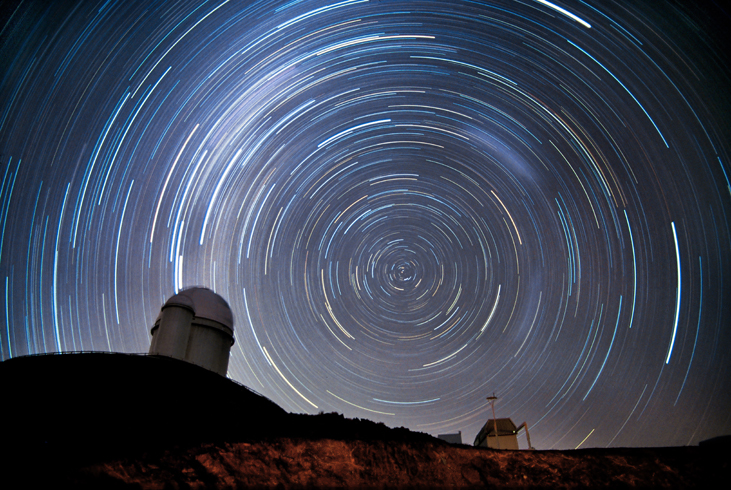 Figure 2.4 Circling the South Celestial Pole. This long-exposure photo shows trails left by stars as a result of the apparent rotation of the celestial sphere around the south celestial pole. (In reality, it is Earth that rotates.) (Credit: ESO/Iztok Bončina)

Now let’s imagine how riding on different parts of our spinning Earth affects our view of the sky. The apparent motion of the celestial sphere depends on your latitude (position north or south of the equator). First of all, notice that Earth’s axis is pointing at the celestial poles, so these two points in the sky do not appear to turn.

If you were at Earth’s equator, on the other hand, you see the celestial equator (which, after all, is just an “extension” of Earth’s equator) pass overhead through your zenith. The celestial poles, being 90° from the celestial equator, must then be at the north and south points on your horizon. As the sky turns, all stars rise and set; they move straight up from the east side of the horizon and set straight down on the west side. During a 24-hour period, all stars are above the horizon exactly half the time. (Of course, during some of those hours, the Sun is too bright for us to see them.)

What would an observer in the latitudes of the United States or Europe see? Remember, we are neither at Earth’s pole nor at the equator, but in between them. For those in the continental United States and Europe, the north celestial pole is neither overhead nor on the horizon, but in between. It appears above the northern horizon at an angular height, or altitude, equal to the observer’s latitude. In San Francisco, for example, where the latitude is 38° N, the north celestial pole is 38° above the northern horizon.

For an observer at 38° N latitude, the south celestial pole is 38° below the southern horizon and, thus, never visible. As Earth turns, the whole sky seems to pivot about the north celestial pole. For this observer, stars within 38° of the North Pole can never set. They are always above the horizon, day and night. This part of the sky is called the north circumpolar zone. For observers in the continental United States, the Big Dipper, Little Dipper, and Cassiopeia are examples of star groups in the north circumpolar zone. On the other hand, stars within 38° of the south celestial pole never rise. That part of the sky is the south circumpolar zone. To most U.S. observers, the Southern Cross is in that zone. (Don’t worry if you are not familiar with the star groups just mentioned; we will introduce them more formally later on.)